I am making up a new dessert by combining 3 of my favourites: peach Melba, Eton mess and trifle.

Adore anything peach, it is my all-time favourite fruit and now in season I eat about 10 a week, I just can’t get enough of them: straight up, grilled in my salad or in a dessert.

Check out my grilled peaches with cardamom and whiskey cream, click here.

PEACH MELBA is a dessert with peaches, raspberry sauce and vanilla ice cream. It was invented in 1893 by the infamous French Chef Escoffier at the Savoy Hotel in London to honour the Australian soprano Nellie Melba. It was an immensely popular dessert, somewhat out of fashion today but I just adore it!

ETON MESS is a dessert of fresh strawberries, whipped cream and meringue. It was first mentioned in 1893 and believed to be created at Eton college in the UK and called a mess due to its appearance.

TRIFLE is a dessert with layers of fruit, sponge cake drenched in sherry, custard and is topped with whipped cream. A version of this was already common in 16th century England. Ladyfinger biscuits are often used now.

STEP 1: Soak the slices of peaches in champagne for minimum an hour.

STEP 2: start layering with cake and raspberry coulis on the bottom. 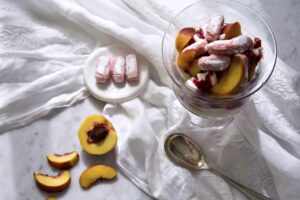 Written and photographed by Sandra Slawinski without commercial deals. I used my friend Bea’s vasque , table cloth from ZaraHome, vintage silver spoon and white galet my mama made.

My Cardamom roasted figs with goatcheese

My carrot and spice muffins with cream cheese frosting