I drink tea all day long, every day of the year. I want to shed light on the teacup it self: what it is made of and why we should all drink our tea from a gorgeous teacup versus plain mug!

WHAT IS A TEACUP – a small vessel made to drink tea from ( duh), it may be with or without a handle. Tea is 5000 years old and the Chinese introduced a porcelain or stoneware vessel first in the 8th century. It first appeared in 17th century in Europe when tea was being imported from the colonies. The handle to the cup came a century later as Europeans served their tea much hotter than the Chinese did. In 19th century they became part of a set with matching saucer, made out of ceramics. Cups for morning tea are generally larger than for afternoon tea. 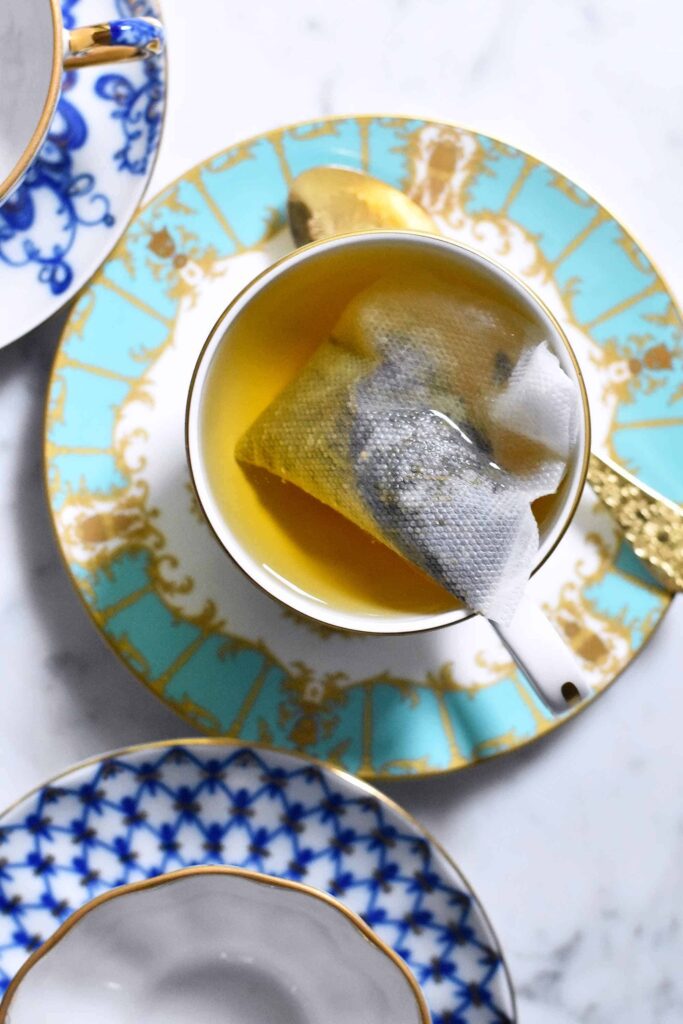 MATERIALS USED – ceramics are the most common teacups either in stoneware or porcelain good for durability and mass production. A more sturdy china for daily use and semi-translucent bone china for elegance and collectors.

Porcelain is a white vitrified translucent ceramic. Made out of clay and is supplemented by glass, bone ash, alabaster, etc. Porcelain is fired at a higher temperature so its is harder.

Bone china contains a minimum of 30% of bone ash to combat the brittleness of porcelain and fired twice. It has a creamy colour due to the bone ash. Bone china when held to the light is semi-translucent.

Fine china is made from porcelain and is whiter due to the granite powder added.

Let’s face  it nor plastic nor Styrofoam cups can induce the pleasure of a bone china teacup. 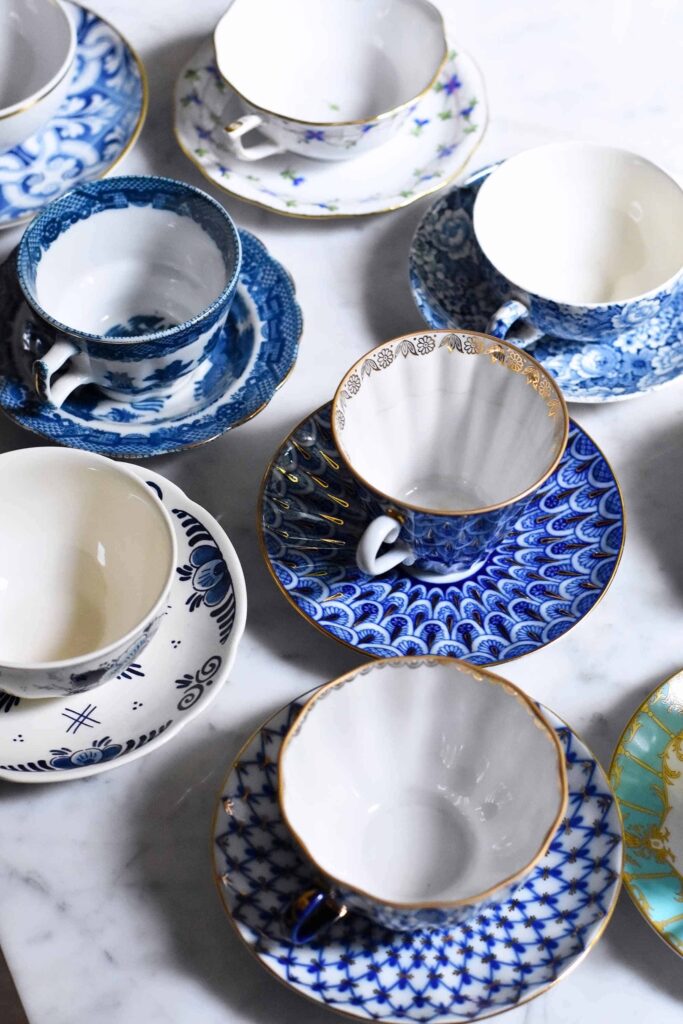 STYLE AND COLOUR – The style of the bowl ranges from basic straight, rounded, fluted ribbed to scalloped. The handle also has different forms such as D-shape, ring and curled. The foot can be flat or raised. The designs range from hand painted floral and fruit motifs to Victorian silhouettes in every colour. I find a slim rim also very pleasing to drink from and porcelain does not alter the flavour of the tea.

I noticed when I pulled out my collection ( some are vintage or new versions of vintage design) I noticed I have a LOT of blue and white ( actually almost all are). Blue and white pottery became very popular in China in 14th century when the cobalt blue pigment was discovered in Persia.  Through the Dutch trading with the East, Delftware ( called blue Delft) became extremely fashionable in Europe in the 17th and 18th century. So no wonder that most of my collection is blue and white as it are vintage designs colliding when tea became fashionable in Europe.

TEACUP vs MUG – my pet peeve 🙂 tea is generally served in a teacup with saucer versus a mug as the larger circumference will allow the tea to cool down faster and be enjoyed sipping tea without burning your lips. Of course the elegant cup and saucer brings honour to the noble drink and the tradition. The right teacup will enhance your tea drinking experience in every way, believe you me.

Written and photographed by Sandra Slawinski without commercial deals. My tea cup collection: Fortnum & Mason, Delftware, Herend and Imperial Lomonosov china and a few vintage pieces in between.

My autumn table with warm desert shades and dried flowers

How to create a stunning table centrepiece on a budget

My 9 tips for a great summer party at home