My roasted rhubarb with hummus, feta and homemade tortilla chips

Another seasonal gem just came into season : rhubarb. These tangy, crunchy stems served with strawberries is a match made in fruit heaven. There are plenty of sweet recipes out there: pies, cakes, compotes, turnovers etc. I like my rhubarb roasted and served in a savoury dish like with hummus and feta. I also decided to make my own flour tortilla chips. How hard can it be, right? 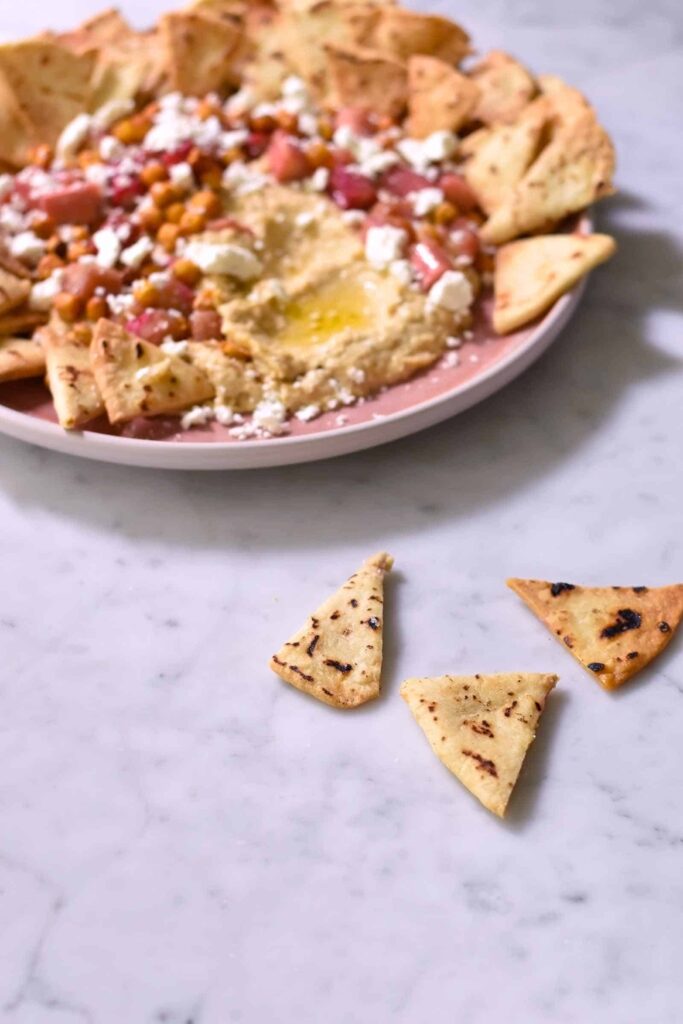 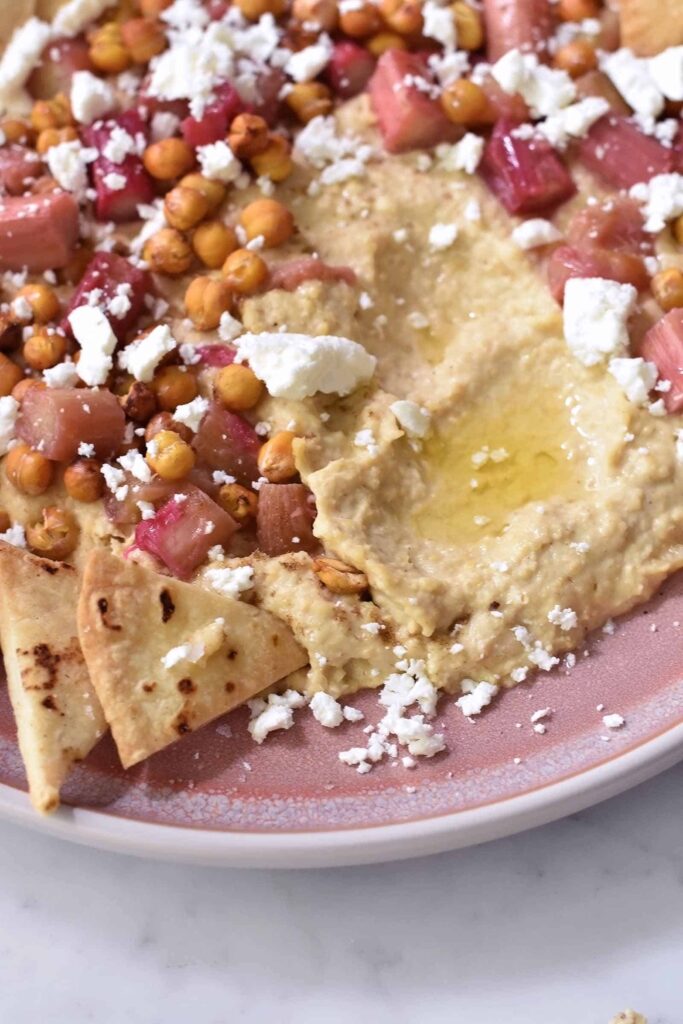 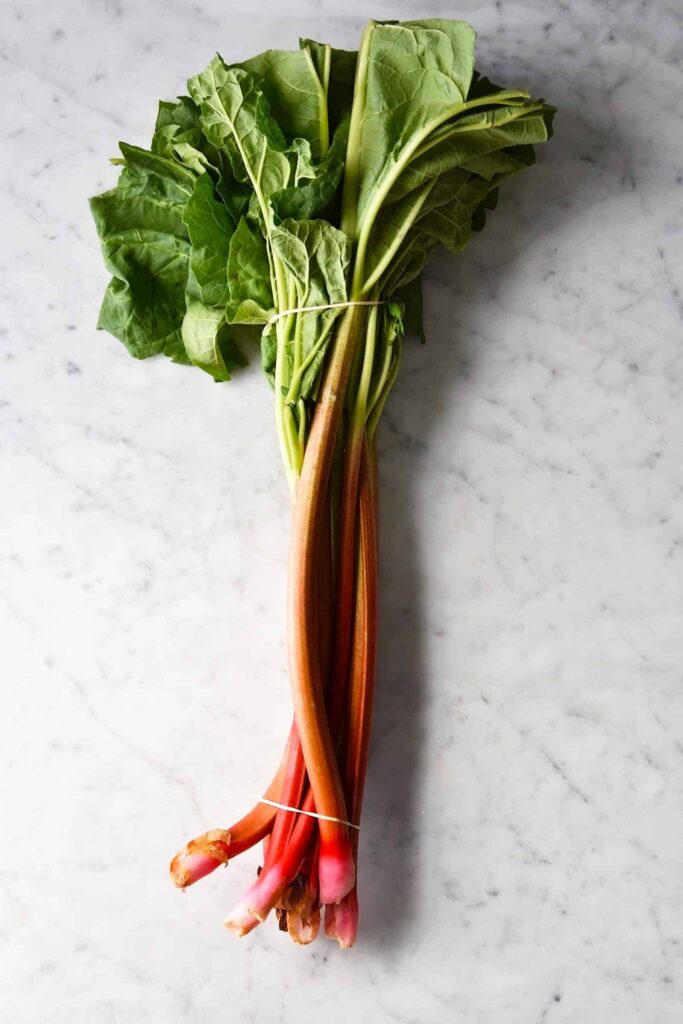 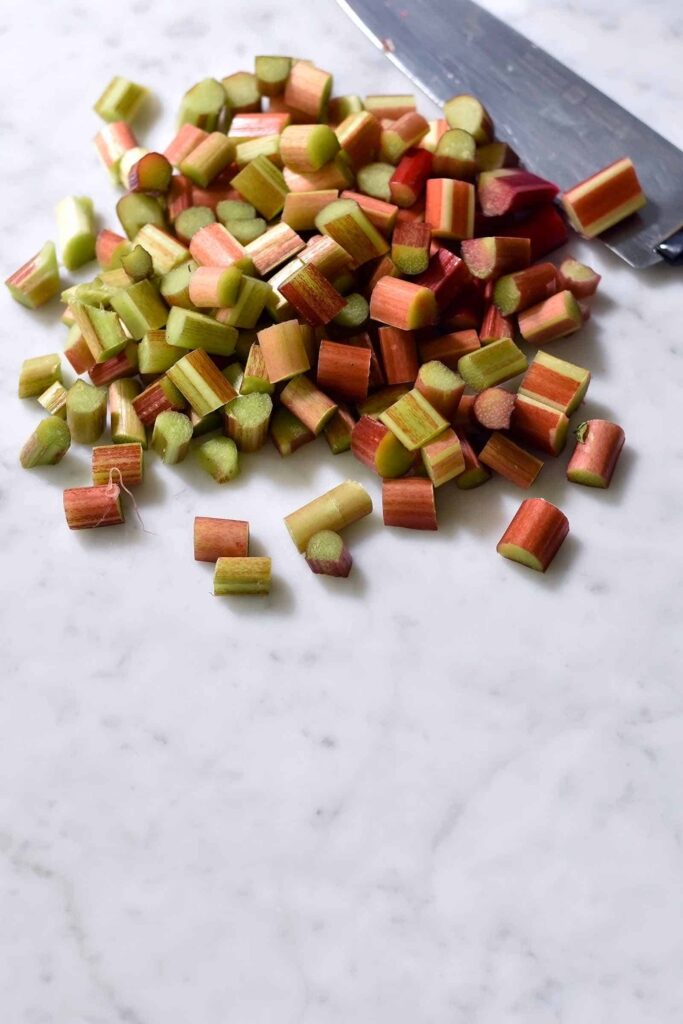 STEP 1: Peel the rhubarb if needed, Dice in 1 cm chunks. 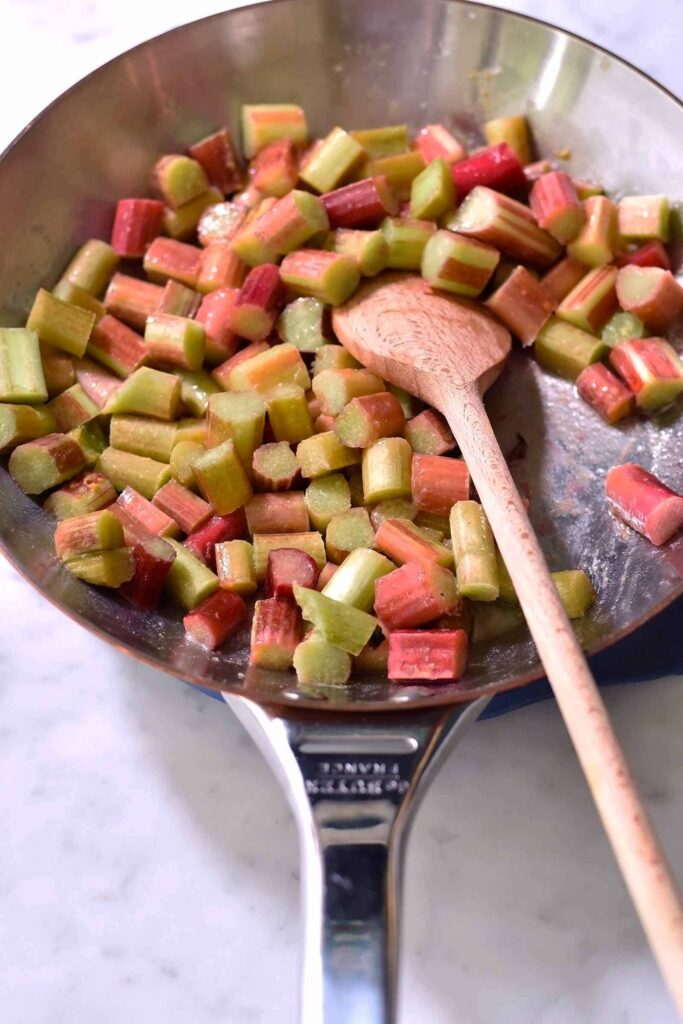 STEP 2: Add to a pan with olive oil and season with ground ginger. 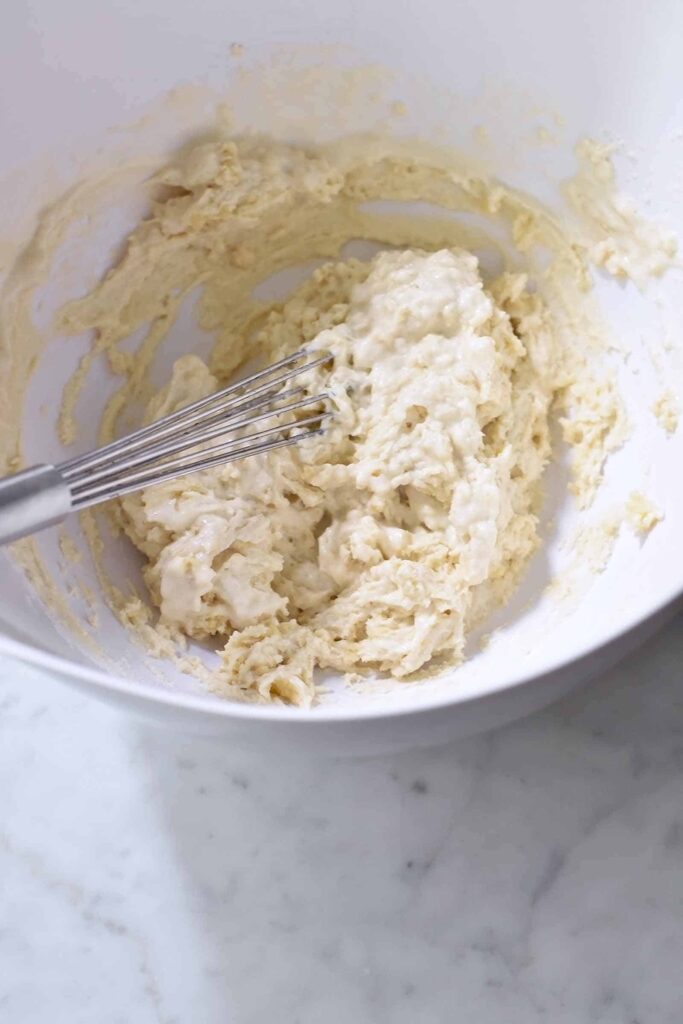 STEP 3: Add to the flour , salt and baking powder the oil and water and mix well. 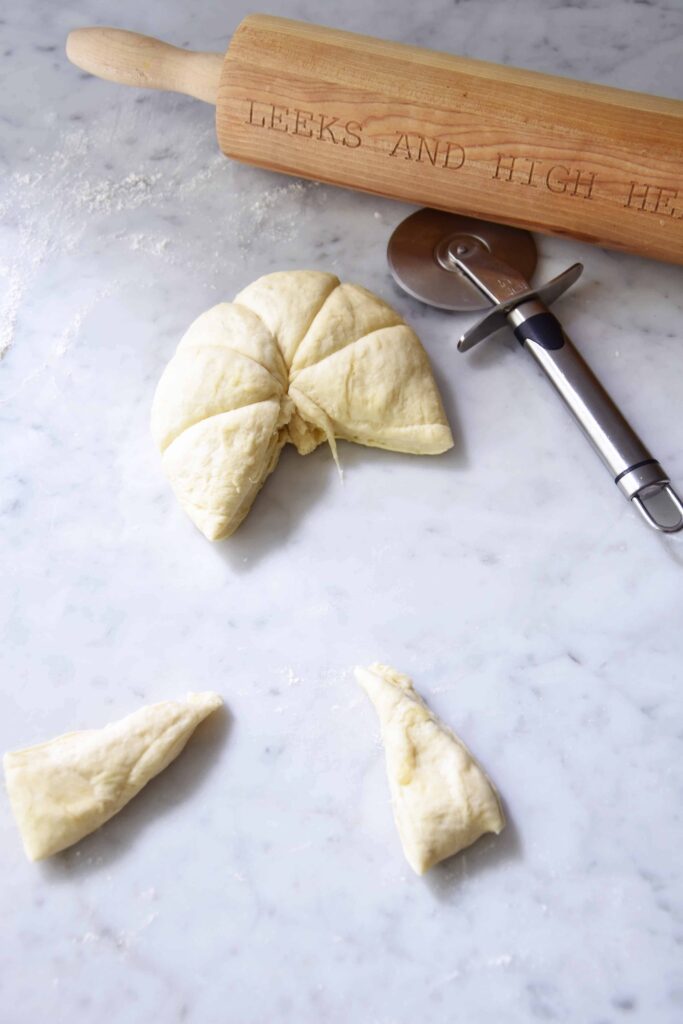 STEP 4: Kneed the dough and form a ball. let rest for 10 minutes and than divide in 8 or 10 equal parts. Form little balls.

STEP 5: Roll out each ball of dough with a little dusting of flour on the rolling pin. 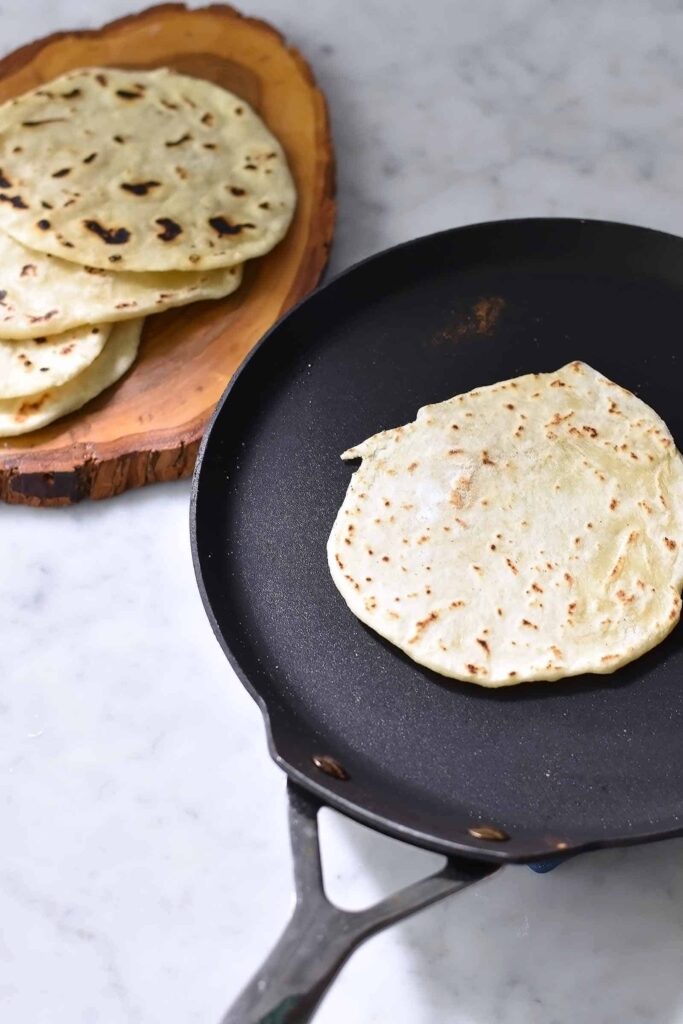 STEP 6: Heat a crepes pan or other non-stick pan and bake each side for about 2 minutes on high heat. 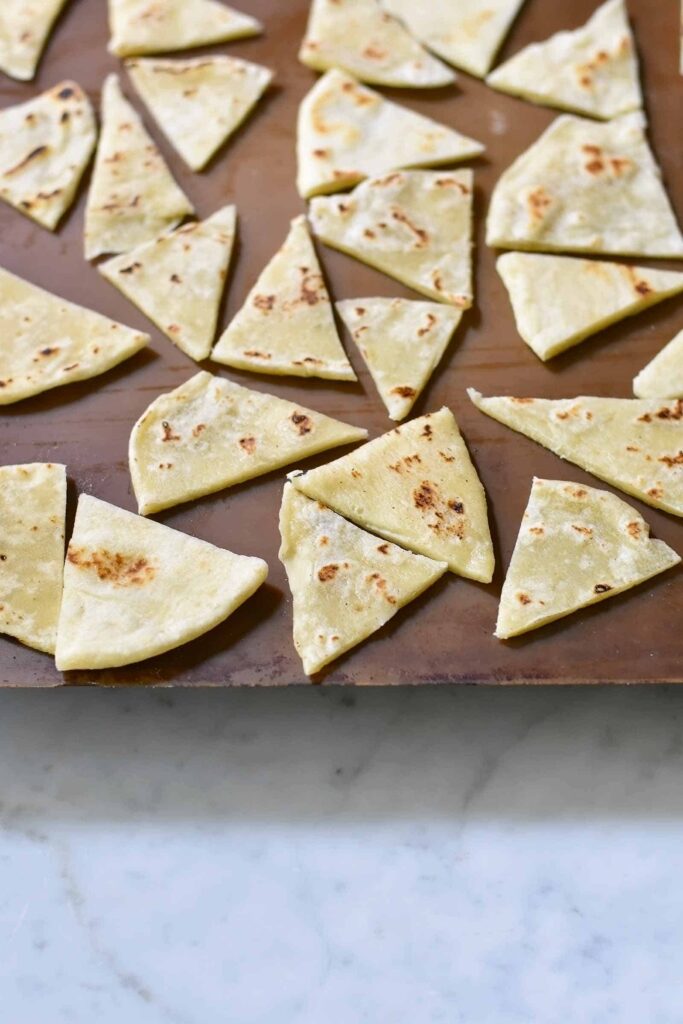 STEP 7: Cut the tortillas into triangles and lay on baking tray and mat. Sprinkle with salt. Bake in pre-heated oven at 180 C for about 15 minutes. 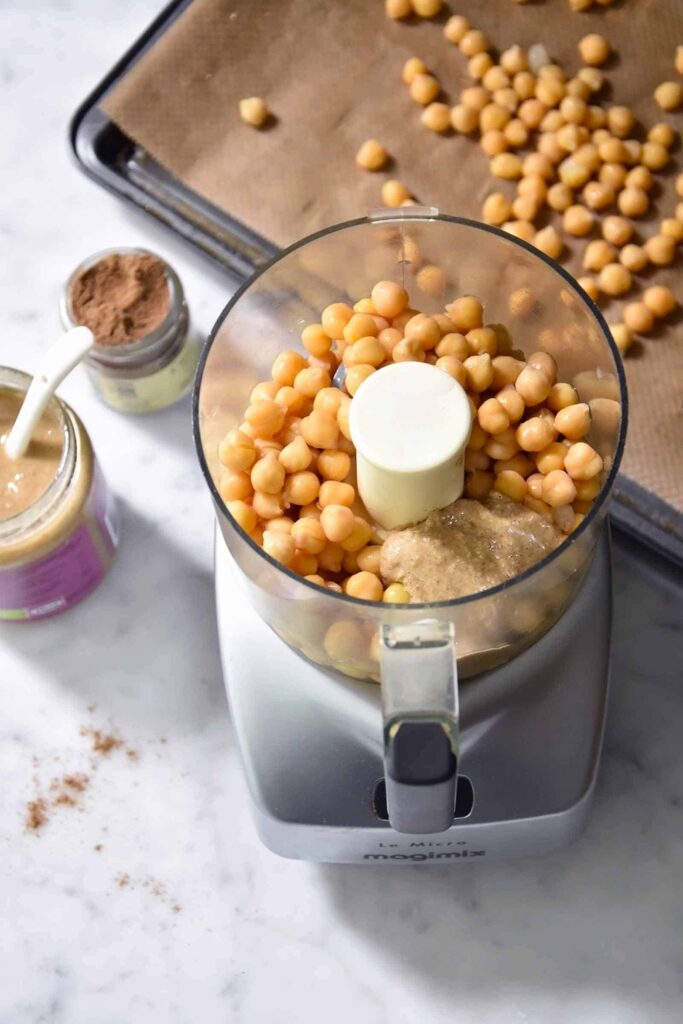 STEP 8: Make your hummus and place some chickpeas well drained and dried off on baking tray and sheet, sprinkle with salt. Bake for 20 minutes in pre-heated oven at 180 C.

RHUBARB – This plant popped in cookbooks in the 18th century where as before it was more medicinal. Its origins are not quite clear but definitely came from China, via Greece and Turkey and than widely available in Europe. In the UK they force the shed grown rhubarb to stay  alight shade of pink by keeping the light out and harvesting by candlelight. The leaves are poisonous so compost those. It is easy to gown in your garden or on your balcony, they need well draining soil and plenty of sun. Bets not to harvest the 1st year, give the plant a chance to establish it selves. Always leave 2 stalks on the plant when harvesting for a continued production. Come fall remove the died stalks, cover with mulch or compost high in nitrogen and let dormant for winter. I chopped them up, didn’t peel them much as they are quite little and young shoots. Dumped them in a pan with some ground ginger and olive oil and let them soften.

TORTILLA CHIPS – it is basically flour, baking powder, a pinch of salt with oil and water. Easy to make and very satisfying. I baked them first on my Le Creuset crepes pan on the stovetop for about 2 minutes on each side and than cut them in triangles, sprinkle of salt and baked them for another 15 minutes in the oven. I rolled them out with my rolling pin but I could ve done them thinner but they turned out quite crisp.

HUMMUS – everyone has their own favourite way of making it. I don’t use any garlic as I can’t digest it.  If you have the 3 essentials everything else you can just make it your own. You need chickpeas ( duh), tahini and olive oil. Tahini is a sesame seed paste you can find in the Middle Eastern and Asian cuisine section of the supermarket or organic store. I just LOVE it, soo I put loads in. You can make it yourself  I ve read some recipes but i just buy it and re-purpose the jar. In this version of hummus i added ground caraway seeds which I ADORE. The flavour is if  fennel seeds and cumin had a baby, totally delish. I didn’t add any lime or lemon this time as the rhubarb is already quite acidic. 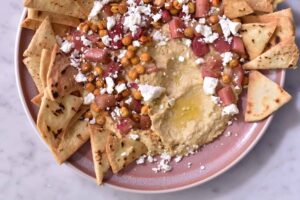 My roasted rhubarb with hummus, feta and homemade tortilla chips

for the tortilla chips:

for the hummus and toppings:

Written and photographed by Sandra Slawinski without commercial deals. I used my plate from Hema.

previous post
My 5 tasty salad dressings made under 5 minutes
next post
How to spend a sustainable foodie weekend in Brussels, Belgium

My dad and rhubarb jam

My Spring floral lunch in the garden serving white asparagus

My rhubarb fool with honeycomb crunch