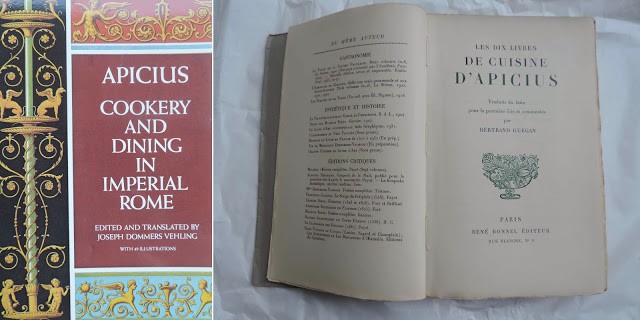 My dad named his restaurant Apicius. He wanted a name nor flemish nor french, a short name, a symbol for gastronomy. Because of my birthday plans in Rome, i thought it was about time i read up about this infamous roman recipe writer of the 1st ever cookbook. In my research i learned that there are more questions about Apicius’ manuscript than answers.
“We do not know who Apicius is. We don’t know who wrote the book bearing his name. we don’t know when it was written, or whether it is of greek or roman origin. Furthermore, we do not understand many of its precepts! We do know, however, that it is the oldest work dealing with the food and the cookery of the ancient world’s greatest empire, and that it is of the utmost interest and importance to us.” wrote JD Vehling in 1936 in his translation of the work.
It is generally accepted that the manuscript was written around the 4th or 5th century AD in a language close to Latin.
Marcus Gavius Apicius, a roman gourmet, a bon-vivant and lover of refined luxury lived in the 1st century AD, during the reign of Tiberius. It is not very clear where the original is nor its translations from the 14th century in French and Italian, it seems the Vatican would ve some.
But Vehling is correct to note: “Apicius was no writer, no editor. He was a cook. He took for granted that spices be used within the bounds of reason, but he could not afford to forget them in his formulae.” Also his observations about disguising foods is spot on and foundation for current gastronomy. Such as The Mock Turtle Soup, made famous again by Heston Blumenthal shows how Apicius still inspires today’s chefs to “trick” eaters.
I read all the translated recipes and indeed some would be revolting to taste. Not only because of odd combinations of ingredients but also as Vehling observed, purposely deceiving to throw off copycats.
The book has recipes for fish, seafood, poultry, meat, vegetables and sauces. Desserts are not represented but for a few dishes with fruit and honey. He also lists methods for preserving foods such as green olives, still the basis of how we do so today. He writes avant la lettre easily digestible vegetable dishes.
To conclude: the apician language of food is universal and as valid today than it was 2000 years ago and continues to inspire chefs.

Written and photographed by Sandra Slawinski without commercial deals.